A CASE FOR AMERICAN ORTHODOXY 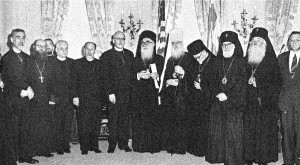 A CASE FOR AMERICAN ORTHODOXY

The incontestable fact pertaining to Or­thodoxy in America is the absence of a unit­ed American Orthodox Church. This phenomenon has historical roots. When Greek-speaking Byzantine missionaries converted the Slavic peoples to Christiani­ty, they did not insist that Greek be the lan­guage of the Church as the Church of Rome did in the West. Hence, when our fore­fathers came here they brought with them, not only their Orthodox Faith but in time, their Orthodox jurisdictions as well. The net result has been an Orthodoxy fragment­ed on ethnic-national lines: Greek, Rus­sian, Syrian, Serbian, Romanian, Albanian, Ukrainian, Bulgarian, etc. Presently, our mission in America is to create a united American Orthodox Church.

Fellow Orthodox, an English-speaking united American Orthodox Church is not only desirable, but feasible. It is a necessi­ty. Our forefathers came here speaking their native tongues. Their offspring is American or Canadian and English-speaking. If Or­thodoxy is to survive and spread, it has to embrace the native language. Orthodoxy is a universal religion, not a particularistic force. As such, it embraces everybody. St. Paul, and the remainder of the New Testa­ment Disciples, opened it to all, Jews and Gentiles, regardless of ethnicity and lan­guage. Let us remember that the Council of Jerusalem, which we read about in the Book of Acts, concluded that all those who turn to Jesus Christ should be accepted. Even the Church of Rome no longer insists on Latin being the language of prayer. Byzantium was right when it permitted the non-Greeks to pray in their own languages. Consequently, if Orthodoxy in America is to deliver its message, it has to speak with one voice and it has to speak the native tongue. We can belong to a united Ameri­can Orthodox Church and still take pride in our particular ethnic background.

What does a united Orthodox Church have to offer America? Historically speak­ing, whether in the Byzantine Empire or in Russia, the Orthodox Church provided a unified set of ideals and ethics. It in­fluenced all aspects of life: culture, educa­tion, leadership, etc. It can do the same for North America. America needs Orthodoxy; America is too materialistic and spiritually deprived. One reason why the Orthodox Churches have not made a noticeable im­pact on American life is because of their fragmentation. In the words of the Lord “A house or city divided against itself cannot stand” (Act 12:2 5). With unity they can fi­nally pool their material and spiritual resources in the service of man and Or­thodoxy.

In order to achieve success in our goal for unity, we the Orthodox people must agree on a number of essential steps.

The first step is to have a strong religious foundation. This is evident in the words of Jesus Christ in Matthew 6:33, “Seek first the kingdom of God and His righteousness; and all things shall be added unto you.” The teaching is clear — if Christ is the pri­ority, God will see to it that our mission will succeed.

The second step is to set aside all dis­agreements in order to achieve unification. All Orthodox Christians agree that there is a mission. Orthodox of all nationalities must gather and discuss the nature of this mission and set a process through which this mission may be achieved. We must heed St. Paul’s advice to Titus when he tells him to “avoid stupid controversies, geneal­ogies, dissensions, and quarrels over the law, for they are unprofitable and futile”. Orthodox people must communicate with one another before they can reach out to other people and offer the salvation that America desperately needs.

The third step to achieve Orthodox uni­ty is the reliance upon the Orthodox in­dividual. Each Orthodox Christian is a mis­sionary and each has his own style of spreading the word of Orthodoxy to the people. In Galatians (3:27, 28) “for as many of you as were baptized into Christ have put on Christ; there is neither Jew nor Greek, there is neither slave nor free, there is nei­ther male nor female, for you are all one in Christ Jesus”. In addition, we learn in the book of Acts, that on Pentecost, it was not only the Disciples who received the Gift of the Holy Spirit, but (Acts 2:1) “when the day of Pentecost had come they were all to­gether in one place”. Americans are cons­tantly encountering religious sects. Jehovah witnesses can be seen in many American neighborhoods and airports. Television evangelists, some of whom are immoral and corrupt, pollute the air waves with non­sense, in order to build huge Christian amusement parks and convention centers. There are many temptations in the world and it is our role as Orthodox Christians to spread the word of Orthodoxy to the peo­ple. In an age where money reigns supreme, people tend to set aside religious priorities until the Lord’s Day. America presently has a shortage of ethics and morals. This drought is plaguing America at home. Domestically, American homes are break­ing apart and families are losing touch with one another. Drugs are running rampant on city streets and our schools are rapidly deteriorating because America’s children have little contact with religion. Recently, Americans saw the likes of John Tower and Ivan Bosky have their lives ruined by greed, addiction, and corruption. Are these the people we want our children to take as role models? Is this what America’s future con­tains? In your minds you are probably say­ing certainly not. The fact of the matter is then evident: America is ready for Or­thodoxy.

Finally, the fourth step is the oldest prob­lem: breaking down the language barrier. America is a melting pot of people and their cultures. Presently, most Orthodox churches celebrate the liturgy in their native language. We now live in America and we all speak English. If all Orthodox jurisdic­tions translated their services into English, a major wall blocking unity would be knocked down.

Now that we have established the fact that America is ready for Orthodoxy, one question still remains: is Orthodoxy ready for America? This question leads directly back to our mission. As Orthodox Christi­ans we must unite the Orthodox Church in order to combat America’s moral and ethi­cal deprivation. In order to accomplish this we must set aside all of our disagreements in order to work toward our goal of Ortho­dox unity in America. Fellow Orthodox Christians, we know that America is ready for Orthodoxy; Orthodoxy better be ready for America.

Philip N. Saliba is a teenager at the St. George Cathedral in Worcester, Massachu­setts, and a member of its Teen SOYO.