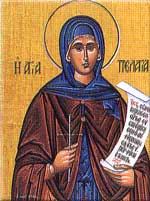 The Lord loves sinners with an abiding love, we are told, and it is easy to imagine that He must have loved the Venerable Pelagia with a special fervor – because this egregious sinner not only sought repentance for her misdeeds, but then went on to become a pious and ascetic saint.

Born in Antioch to parents who were intensely observant pagans, this Third-Century saint frittered away her youth.  Blessed with beautiful features and graceful limbs, she soon became a popular dancer and an accomplished actress.  So wanton and reckless were her ways, however, that she fell at last into the abyss of outright prostitution, which brought her great wealth – even as it deadened and degraded her soul to any awareness of God or spiritual beauty.

Pelagia seemed doomed to a life of moral collapse . . . but the Almighty took mercy on her and inspired her to confront the iniquity into which her existence had descended.  The miracle of her awakening took place one morning around 250 A.D. as she was passing the Church of the Holy Martyr Julian, where the famed Bishop St. Nonnus was delivering a powerful sermon that had his listeners entranced.

Each Sunday, the luxuriously wealthy and remarkably beautiful courtesan was accustomed to riding about the city in a gorgeous carriage pulled by a team of mighty Arabian horses.  But on this particular Sabbath, Providence was clearly at work.  As Pelagia neared the church, her progress was slowed by a crowd of pedestrians, and she began listening to the eloquent words of the Bishop that were ringing from the pulpit inside the Basilica of St. Julian in Antioch.

All at once, Pelagia felt a burst of light illuminating her weary soul.  Stricken by something in the prelate’s voice, she also experienced a sudden wave of overwhelming remorse for her wasted life – and vowed to return later to learn more from this holy Bishop, St. Nonnus.

When she visited him later for instruction, the Bishop vividly described the Dread Judgment of God and the grim rigors of perpetual Hell.  Deeply moved, Pelagia listened in rapt horror to St. Nonnus’ stark catalogue of punishments reserved for those souls that have fallen into everlasting perdition.  Devoured by quenchless fire, the condemned souls shriek and bellow in anguish, while the roaring demons goad them without mercy!

As the Bishop described these endless torments, Pelagia sat motionless and afraid.  Was it too late for her to change her life and save her precious soul?  No!  Within a matter of minutes, the scales had fallen from her eyes and she began to understand that her entire life was being lived as a mistake.  She was in danger of spending all eternity in the howling depths of Hell!

Filled with contempt for her former life of promiscuous pleasure and expensive luxury, the shaken courtesan fell to her knees before the bishop, while imploring him with words like these: “Have mercy on me, a sinner, holy father!  Baptize me and teach me repentance.  I am a sea of iniquity, an abyss of destruction, a net and weapon of the devil.”

The good Bishop responded without hesitation and promised to give the penitent the baptism for which she now yearned.  Nor did he fail to keep his promise.  When the time came for the sacrament to be administered, Pelagia was thrilled to see that the deaconess of the church – Blessed Romana  – would be her godmother.

Tutored later by Romana in the essentials of good Christian living, the now-reformed Pelagia reflected long and hard on the grotesque errors of her earlier, deeply tarnished life.  Soon she became a model of piety and rectitude . . . and whenever she was tempted by the devil, she quickly sent him on his way.

St. Pelagia wasn’t finished yet, however.  Soon she decided to gather up all her valuables and turn them over to the Bishop for distribution to the poor.  He was only too happy to receive the glittering jewels and coins, while declaring loudly, according to Church historians of the period: “Let this be widely dispersed, so that these riches gained by sin may become a wealth of righteousness!”

Within a few days, the entire treasure that had been gained through rank prostitution and deception was turned over to the hungry and the poor, whose lives were made better through this blessing.

Intent on completely rebuilding her spirituality, St. Pelagia then journeyed to Jerusalem in a hair shirt and there began an entirely different existence, while disguised as the pious monk Pelagius.  She took up abode in a cave near the Mount of Olives, where she wore men’s garments and lived a simple life of austerity and devotion.  Throughout the region, she became known as “the beardless monk,” and her true sex was not revealed until the end of her life.

Bishop Nonnus did not forget Pelagia, however. More than three years after her departure, he sent James the Deacon to Jerusalem to visit his friend “Brother Pelagius.”  James found her cell and she came to the door.  He conveyed the Bishop’s best wishes to the woman he thought was a monk, and she did not reveal her true identity . . . but simply thanked him politely and asked him to revisit her soon.

Returning to the cell a few days later, however, James found that the “monk” had expired.  It was only while they were anointing “his” body that they discovered that “Brother Pelagius” had actually been a female!

Pelagia died around 284, according to Church historians, and her tomb on the Mount of Olives has been a place of pilgrimage ever since.

St. Pelagia’s life serves as a remarkable testimony to God’s willingness to forgive all sinners, no matter how deep or long-lasting their transgressions. Her story shows us God’s love and acceptance of all people, regardless of what their lives might have been like prior to their conversion.  God’s forgiveness is not reserved for a few, but freely offered to all!

In thee the image was preserved with exactness, O Mother; for taking up thy cross, thou didst follow Christ, and by thy deeds thou didst teach us to overlook the flesh, for it passeth away, but to attend to the soul since it is immortal.  Wherefore, O righteous Pelagia, thy spirit rejoiceth with the Angels.

With fasting didst thou consume thy body utterly; with vigilant prayer didst thou entreat thy Fashioner that complete forgiveness of thy former deeds be granted thee, which, O Mother, thou didst receive.  The path of repentance hast thou shown to us.