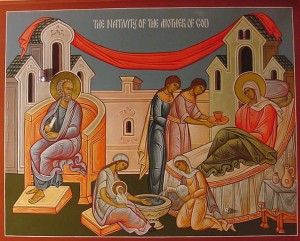 September 8th   The Feast of the Nativity of the Theotokos

The birth of the Blessed Theotokos and Ever Virgin Mary took place in the remote and obscure little town ofNazareth, in the Galilee region of theHoly Land. That hallowed event would be an important step on the long road that led to the birth of Jesus Christ, the Son of God and the Savior of the world.

The name of the Virgin Mary’s birthplace means “the place of blossoming,” and the infinite power of that name can be seen in the unforgettable story of how the parents of the Mother of God were chosen byProvidenceto receive this holy child.  Mary was the daughter of Sts. Joachim and Anna, a pious couple – both of whom were saddened and frustrated by their inability to have children until later in life, according to many accounts of the period.  Because St. Anna remained barren for many years, the couple was sometimes criticized as being unworthy of God’s blessing.

At one point, the contempt for the elderly couple became so great that the high priest at the temple inNazarethrefused to accept Joachim’s sacrifice during Sabbath services!  This rejection was extremely painful, but Joachim and Anna never stopped praying faithfully for the birth of a child.

In many ways, the disregard shown to Mary’s parents by their own fellow-worshippers perfectly symbolizes the humble circumstances into which the Child Jesus, Himself, would later be born.  This prayerful couple lived a quiet, humble existence, even though they were of royal lineage.  St. Joachim was the son of Barpahira and thus a direct descendent of David through Nathan.  St. Anna, meanwhile, was the daughter of Mattan, a priest descended from Aaron, the brother of Moses and the first High Priest.

At the time when Mary was conceived,Nazarethwas a small, unimportant town that lived in the shadow of a mighty, nearby city.  Nonetheless, this humble “backwater” would be chosen byProvidenceas the birthplace of the Mother of God.

Joachim suffered greatly because of his wife’s inability to conceive. Weeping bitterly, he wandered the nearby desert and called on God in a loud, piteous voice to show mercy on him by sending him and his wife a child.  Miraculously, his prayers were answered when the Archangel Gabriel arrived to announce that Anna would soon become pregnant with a daughter whose glorious fate would be to later serve as the Mother of Jesus Christ, the source of salvation for the entire world.

As the Great Church Father, St. John of Damascus, would later write, while describing the sublime event in a well-known sermon delivered during the Eighth Century: “O, blessed couple, Joachim and Anna!  Truly, by the fruit of your loins are ye known to be blameless, according to the words of the Lord.  Ye shall know them by their fruits.

“Ye ordered your lives in a manner pleasing to God and worthy of her who was born of you. . . .  Anna, ye, having chastely observed the laws of nature in all chastity, have been granted of God that which is above nature and brought into the world the Virgin Mother of God.  While in the flesh, ye have piously and virtuously borne a daughter who is higher than the angels and reigneth over them.  Most fair and sweet daughter, lily sprung up in the midst of tares from a root most noble and august, by thee the royal priesthood hath been enriched!”

The birth of the Virgin Mary to an elderly couple of pious rectitude closely mirrors the similar narrative in the Old Testament in which Abraham the Patriarch and his wife Sarah were blessed by God with an unexpected child in very old age.

Like John the Damascene, numerous Church fathers have often compared the Virgin Mary – the vessel that would carry the infant Jesus – to the majesticTempleofSolomon.  That stately edifice, constructed by Solomon’s gifted builder Hiram, contained an immense quantity of priceless gold and richly aromatic woods, including fragrant cedar and cypress fromLebanon.

Describing the Theotokos in his famous homily 1,300 years ago, the Damascene added a poetic description of her nature, while rhapsodizing over the story of her life and destiny: “She is wholly the bridal chamber of the Spirit, wholly the City ofGod, a sea of grace, wholly good, wholly near unto God.”

Recognizing the immense value of the Virgin Mary’s gift to humanity and God alike, theHolyChurchhas established four major feast days to honor the Theotokos.  The Virgin Mary is celebrated on March 25, the date of the Annunciation; on August 15, the day that commemorates her Repose; on November 21, which saw the Entrance of the Blessed Theotokos to theTemple, and on February 2, when the Mother of God brought the infant Jesus to the temple for presentation, 40 days after his birth.

The life of the Virgin Mary serves as a wonderful illustration of the key principle of Christianity: the idea that God chose to send his only Son into the world as a human being, in order to redeem that world and save it from sin.  As many Church Fathers and New Testament scholars alike have pointed out over the centuries, the Virgin Mary’s acceptance of her key role in the birth of the Savior is one of the most sublime instances of human fidelity to God in the entire history of Christianity.

Thy Nativity, O Theotokos, hath proclaimed joy to the whole world; for from thee hath dawned the Sun of Righteousness, Christ our God, annulling the curse and bestowing the blessing, abolishing death and granting us life everlasting.

Joachim and Anna were freed from the reproach of childlessness, and Adam and Eve from the corruption of death, O immaculate one, by thy holy Nativity, which thy people, redeemed from the guilt of offences, celebrate by crying to thee:  The barren woman giveth birth to the Theotokos, the nourisher of our life.