By Archbishop Dmitri of Dallas and the South 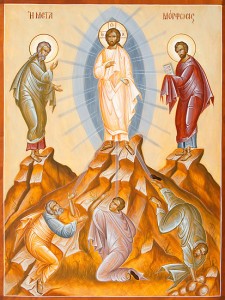 The Transfiguration of Christ is recorded in the first three Gospels (Matthew 17:1-9; Mark 9: 2-9; Luke 9: 28-36). The fourth does not contain an account of the event, but its author, being one of the three witnesses, is probably referring specifically to it when he says: And the Word was made flesh, and dwelt among us, And we beheld His glory, the glory as of the only begotten of the Father, full of grace and truth (1:14). The holy Apostle Peter also recalls his (as well as James’ and John’s) presence with the Lord on Mt. Tabor: (we) were eyewitnesses of His majesty. For He received from God the Father honor and glory, when there came such a voice to Him from the excellent glory, This is my beloved Son, in whom I am well pleased. And this voice which came from heaven we heard, when we were with Him in the holy mount (II Peter 1:16-18).

All three Gospel accounts agree in the details of the event as well as its following the rather crucial conversation between Jesus and the disciples on the road to Caesarea of Philippi. The Lord seems to have wanted to get certain matters of great importance clear in the minds of His followers before He entered into His priestly ministry. 1) In answer to His question, Whom do men say that I the Son of Man am? we have

Peter’s confession: Thou art the Christ the Son of the living God (Matthew 16:16), or thou art the Christ (Mark 8:29), or the Christ of God (Luke 9:20); 2) Jesus then foretells His suffering, death and resurrection; 3) He rebukes Peter for his objection that such things could not happen to Him; 4) He exhorts them to bear the cross if they would be true disciples; and 5) He promises that some of those standing there would not taste of death till they have seen the Son of Man coming in His kingdom (Matthew 16:28), or till they have seen the kingdom of God come with power (Mark 9:1), or till they see the kingdom of God (Luke 9:27).

The narration of the Transfiguration on the mountain comes immediately after the description of the conversation after six days, although Luke says: about eight days after (both expressions were commonly used for “a week later”): Jesus’ acceptance of the name of Christ or Son of God, His final great prophecy, His reminder of what the life in Him will consist of, and His promise concerning the kingdom. These things, then, must be understood as linked to the Transfiguration itself and as a preparation of the disciples for it.

After having declared that Peter’s confession was revealed to him by the heavenly Father (Matthew 16:17), and then having predicted His Passion and Resurrection, the Lord leads the three, (Peter, James and John) to a “high mountain” where His eternal glory is revealed. Thus, the disciples could understand that the suffering and death that He was to undergo was voluntary. “Thou disciples, insofar as they could bear it, beheld thy glory, O Christ our God; so that, when they saw thee crucified, they might remember that thy suffering was voluntary, and could declare to all the world that thou art truly the effulgent Splendor of the Father.” (Kontakion of the Feast) However, the instruction of the disciples was only one of the purposes of this manifestation.

It is possible to understand the Lord’s promise “that there were some standing there that would not taste of death, till they see the Son of Man coming in His kingdom,” as being fulfilled precisely in the Transfiguration. In other words, seeing Jesus the Man already glorified, as He will be after the resurrection, and their being able to see Him in His eternal glory, is nothing more than their seeing the Kingdom of God. Jesus’ glorification as the Son of Man, He was yet to pray for just before the crucifixion (John 17:4). This then would be a vision of that glorification by anticipation. Yet, all of God’s acts, His divine counsel, accomplished in the time of this world, are already accomplished timelessly, eternally by Him for whom there is no time. In the dazzling light, in which the very mountain and all the surroundings were altered, there is a glimpse of the transfigured world (cosmos), when God will be all in all, when the Kingdom is finally established.

The initial presence of Moses and Elias, to whom God had revealed his glory, testifies to the continuity of the mighty work of God and to the fact that the Son participated in those Old Covenant revelations. Moses and Elias then disappear and the uniqueness of Jesus, who had apparently been more or less equal to them in the eyes of the disciples, is now evident. Further, we hear the voice of the Father that came out of the cloud: This is my beloved Son, in whom I am well pleased; hear ye Him (Matthew 17:5). This voice was the Father’s response to Peter’s enthusiastic suggestion that they make three tabernacles, one for Jesus, one for Moses, and one for Elias.

The disciples fell on their faces, for they could not bear, as created beings, the vision of glory. Only when Jesus touched them and told them to arise and not be afraid, were they able to return to the reality they knew. Our own credal statement, “Light of Light,” with reference to the Son is testimony to our faith that God is light and that the Son is also light, and is related to this vision as the eternal, uncreated light on Mt. Tabor.

The same declaration of the Father concerning Christ’s eternal Sonship had been heard at the very beginning of His public work, at His baptism. It was at that time that the Holy Spirit descended upon Him (Luke 3:22), and He began His prophetic ministry, that is, His mission to preach the Kingdom of God and to declare the will of God for mankind. Now, when this voice is heard a second time, a cloud overshadows Him (the cloud was frequently the image of God’s glory and the symbol of the Holy Spirit’s descent in the Old Testament – Exodus 19:9; Leviticus 16:2; II Chronicles 5:13, etc.). It is then, at this point, that the prophetic ministry gives way to Christ’s priestly ministry. The Transfiguration is not only another revelation of the Holy Trinity, but also another anointing for Christ’s work, this time for the sacrifice, in which Jesus would be not only the priest who sacrifices, but the victim who is sacrificed.

“O thou who before the ages art God the Word, O thou who art clothed with light as with a garment, thou wast transfigured before thy disciples, O Master, and didst shine forth more radiantly than the sun. Verily, Moses and Elias did stand before thee, clearly showing that thou art the Lord of the quick and the dead, glorifying thine ineffable providence, thy mercy, and thy great condescension wherewith thou didst save the lost.” (Prosomion on the Praises, Matins of the Feast)

You were Transfigured on the Mount, O Christ God,

Revealing Your glory to Your disciples as far as they could bear it.

Let Your everlasting Light shine upon us sinners!

Through the prayers of the Theotokos, O Giver of Light, glory to You!

On the Mountain You were Transfigured, O Christ God,

And Your disciples beheld Your glory as far as they could see it;

So that when they would behold You crucified,

They would understand that Your suffering was voluntary,

And would proclaim to the world,

That You are truly the Radiance of the Father!