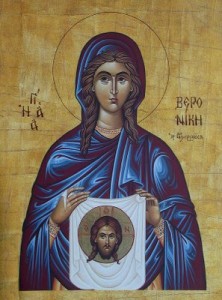 It happened near theSea of Galilee, on a mild summer afternoon when Our Lord was busy healing the sick and preaching the Holy Gospel.

It happened when a woman of great faith detached herself from the crowd of onlookers who were following Christ and dared to approach him.  Her name was Veronica, and she was struggling with a chronic health problem in which she hemorrhaged continually, leaving her weak and anemic and constantly ill.  Hoping for relief from this life-threatening ailment, she was content to approach the Lord silently and merely touch the hem of his robe.

The story is beautifully told in the Gospel of St. Luke, as follows:

Now a woman, having a flow of blood for twelve years, who had spent all her livelihood on physicians and could not be healed by any,  came from behind and touched the border of His garment. And immediately her flow of blood stopped.  And Jesus said, “Who touched me?” When all denied it, Peter and those with him said, “Master, the multitudes throng and press You, and You say, ‘Who touched Me?’”

But Jesus said, “Somebody touched Me, for I perceived power going out from Me.” Now when the woman saw that she was not hidden, she came trembling; and falling down before Him, she declared to Him in the presence of all the people the reason she had touched Him and how she was healed immediately.

Although little is known about the life and history of this pious woman, her story has inspired many Christians because of the way it embodies so much faith.  Veronica was probably a resident of one of the small towns that flanked the Sea of Galilee, and there are many later legends that connect her to an incident in which a grieving woman wipes the face of Jesus as he walks to His Crucifixion – and then discovers later that His image has become affixed to her white handkerchief.  (This incident is not recounted in the Gospels, however, and actually appears to have emerged during the 13th Century, when such stories about the life of Jesus became especially popular.)

The moment in which St. Veronica dares to touch Jesus – out of her great hope that He can heal her – can teach us a great deal about the immense power to be found in our trust that God loves us and wants to heal us of our infirmities!

In thee the image was preserved with exactness, O Mother; for taking up thy cross, thou didst follow Christ, and by thy deeds thou didst teach us to overlook the flesh, for it passeth away, but to attend to the soul since it is immortal.  Wherefore, O righteous Veronica, thy spirit rejoiceth with the Angels.

Kontakion in the Eighth Tone

For love of God, O righteous mother Veronica, thou didst spurn the need for rest. By fasting thou didst make thy soul luminous and didst utterly defeat the beast. By thine intercessions do thou destroy the snares of the enemy.