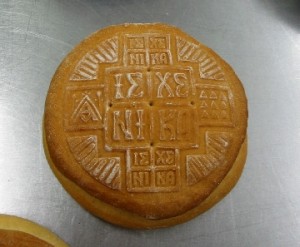 An Offering to God

Every Orthodox parish must have one or more persons to make prosphora, the bread used in the Liturgy. It could be the priest or a layperson. For those who live a devout Orthodox Christian life, making prosphora is a very special way to serve God and His Holy Church. It is a great privilege and requires a blessing from the priest. This does not mean that a family cannot make prosphora for a special occasion, perhaps in memory of a deceased loved one. This is actually a longtime practice in the Orthodox Church. I am aware of parishes and monasteries in this country that receive 40-50 loaves of prosphora for special feast days! That is astounding to me! I think of this happening in Orthodox Churches in the motherlands but not in America. It appears that among some American Orthodox Christians this pious practice has never died. I know of another parish where the baking of the prosphora rotates among various families, and is listed among the various other tasks for any given Sunday, i.e., Greeters, Coffee Hour Hosts, Prosphora, etc.

Making prosphora can be a very special family activity this summer or anytime. “Too hard,” you say. “I don’t have the recipe or a seal,” you say. The directions and recipe are included in this article. The seal can be purchased from a variety of sources (see below) or perhaps borrowed from the parish priest or the person who regularly makes prosphora for your parish. Even if you make a loaf ofprosphora just for the purpose of a lesson with your children, it will be a blessing. If you decide to make the prosphora as your family’s offering for the Liturgy, be sure to submit a list of names of your family’s living and the dead to be commemorated. Let your parish priest know what you will be doing and ask his guidance and blessing.

What do the Scriptures Tell Us about Bread?

“He causes the grass to grow for the cattle, and vegetation for the service of man, that he may bring forth food from the earth, and wine that makes glad the heart of man, oil to make his face shine, and bread which strengthen man’s heart.” (Psalm 103:14-15, LXX

[the Septuagint translation of the Old Testament, used by the Church]. Known as the Poem of Creation, Psalm 103 is sung at Vespers.) This Old Testament psalm gives us much information: God created from nothing; He is the “Cause” of everything. He provides for the animals and for man. God has given the earth to man, and by working the earth, man can grow his food. When used appropriately, wine can lift our spirits. Oil has many uses. It adds flavor to our food. It is medicinal when used topically. In Jesus’ time people would apply oil to their faces after washing. Bread is a staple in our diet, giving us the strength we need.

In the Lord’s Prayer Jesus told us pray “give us this day our daily bread.” It is the only thing we are told to ask for since it represents all the food that we need to sustain our life. And Jesus said, “I am the living Bread which came down from heaven. If anyone eats of this bread he will live forever; and the bread which I shall give is My flesh, which I shall give for the life of the world.” (John 6:51). At the Last Supper, Jesus used bread as a way to continue to share in the lives of His Disciples. He took a loaf of bread and broke it. Just as the loaf is broken and consumed to give us life, so His body, broken on the cross, would give us everlasting life. He asked us to do this in remembrance of Him. When we participate in the Eucharist, we do just that!

A Little History about Bread

For us in the twentieth century, bread is just bread. (Except if we are refugees in the Balkans or elsewhere. When we see bread being unloaded from trucks, we only begin to understand its importance!) We can live without it. After all, we have bagels, English muffins, and anything else we want to make, or, more often, buy. Bread is bread! Or is it? I can remember going with my mother to the Greek-Italian import store for specialty items not found in the local grocery store: feta cheese, Greek olives, and Italian bread. That Italian bread was not sliced. It had a hard crust all around it. It had a different texture; it was chewy. And it was great to use to sop up the salsa/sauce from various Greek meals Mom made. Bread isn’t just bread!

At the time when Jesus walked among us, bread was an important staple in the diet of ordinary people. By virtue of paying taxes, each Roman citizen was entitled to a daily ration of bread. As a result it was regulated. The Romans had stringent laws about the size and weight of loaves of bread that were sold. The consequences for shortchanging the purchaser were dire. Sealing each loaf with the imprint of the baker kept the bakers honest, and guaranteed that the Roman government got exactly the amount of bread paid for to feed the Roman troops. Bread was not the only item sealed. Dealers of olive oil and wine used clay seals to identify their products.

Bread and the Liturgy

Prosphora is a Greek word meaning “offering.” In one sense, all that we offer for the use of the Church is prosphora: wine, incense, charcoal, oil (for oil lamps), candles, flowers, and bread. Our offerings are never raw materials. In all these cases we take something and make it into something else. Grapes to wine, olives to olive oil, wheat to bread, etc. Generally speaking, prosphora refers to the bread offering. In addition, the bread was not only a gift for use in the Liturgy, but it was also a gift to the Church to feed the priest and the poor.

While its use has remained the same as in the early Church, its form and markings have evolved. Bread with markings and in various shapes was common in ancient times among pagans as well as Christians. People decorated or impressed symbols on bread that was baked, bought, and eaten every day, as well as on bread offered in religious rites. Once again the Church “Christianized” a pagan or common practice.

Details concerning the first Eucharistic loaves are not found in the writings of the early Fathers. “Probably the texts are silent because the forms and symbols were known to all and interpreted correctly. The use of bread in worship was delivered to the Christian communities by practice itself, before any formulation had found a place in the written documents. This is better understood if one remembers that the celebration of the Eucharist predates any written source. The Sacrament was celebrated as soon as a Christian group was formed. In Jerusalem, for example, the Eucharist was performed immediately after Pentecost, that is, twenty years or more before the writing of the Synoptics.” [the Gospels of Matthew, Mark and Luke] (Galavaris, Bread and the Liturgy, p.22)

During the time of Christian persecution, Christian symbols became cryptic, hiding, for example, the cross in simple decorative motifs. Although the symbol used on the bread may have varied during the early years, St. John Chrysostom (4th century) refers to the bread being “sealed,” probably with the IC-XC NIKA.

The Slav tradition uses a small seal, stamped on five loaves, in honor of the “feeding of the 5000.” These small loaves are made with two layers to represent both the two-fold nature of Christ and the uniting of heaven and earth. The Greek style, which uses one large loaf marked with IC-XC NIKA in the center, surrounded by several other seals, signifies the one Body of Christ. The first bread seals were bronze. Seals have also been made of ceramic, marble, wood, and now plastic.

Preparing the Bread at Church

The priest prepares the offering in the part of the Liturgy called the proskomidia or prothesis, offered just prior to the Divine Liturgy. The center of the seal, in both the Greek and Slav traditions, reads IC-XC NIKA, which means “Jesus Christ Conquers /The Victor.” The priest cuts one seal in the shape of a cube to be offered as the “Lamb,” which becomes Christ’s Body. He also removes pieces and places them next to the Lamb on the diskos (paten). To the left is placed a large triangular piece for the Theotokos, Christ’s Mother. Nine smaller triangular pieces are placed to the right, in three rows of three, “in memory of John the Baptist, the prophets, apostles, hierarchs, martyrs, monastic saints, healers, and the whole company of the righteous, with special mention of the saints commemorated on that particular day. Finally a piece of bread is place on the diskos in memory of the saint whose liturgy is being celebrated. In addition, two rows of bread pieces are placed on the diskos for the bishop of the given church, for the civil authorities of the country and for all of the faithful both living and dead, once more with particular mention by name of those particularly remembered by the local community.” (Fr. Thomas Hopko, The Orthodox Faith, Vol. 2, Syosset, NY, 1975, p.160-1). In this way the whole Church, the entire Body of Christ – saints, loved ones in heaven together with the local congregation – participates in the offering to God. In the Slav tradition a separate loaf is used for each set of particles cut during the proskomidia: the Lamb, the Theotokos, the “Nine Ranks,” the living, and the dead.

Preparing this bread is a very special and holy service to God. By reflecting on the bread’s use, the baking of it becomes a prayerful and solemn undertaking. Needless to say, before one begins the baking process, prayers are in order. Although traditions vary, begin with the Trisagion Prayers and the Creed. The work area can be sprinkled with holy water and a vigil light lit. While the bread is rising, read some of the psalms or other spiritual reading. Consider placing a vigil lamp/candle near the rising bread. Your parish priest should be able to offer guidelines relative to your jurisdiction’s practice.

This task is so important, that in some monasteries there is a separate area and oven to prepare the prosphora. If one was makingprosphora on a regular basis, the equipment used should be kept separate and used only for prosphora baking. Only the purest ingredients available should be used. A suggested recipe appears below.

AND THERE’S A VIDEO, TOO! A one-hour color video – “How to Make Orthodox Prosfora” – shows Mother Apolinaria demonstrating the techniques of how to make prosphora, while the abbess, V.Rev. Mother Gabriella, explains the process and discusses related topics. Filmed at the Dormition of the Mother of God Monastery in Rives Junction, MI. Includes a summary of the prosphora-making process at the end, and a short Proskomidia. $19.95 + $3 SH. Contact Firebird Videos, 27 Menlo Park Drive, Belleville, MI 48111-2918 / 734- 699-0870 / FAX -734-699-1295.

[Editor’s Note: My Greek-style seal also has the Slav style seal as the handle.]

For More Information on Prosphora

A Recipe for Prosphora

To make small prosphora, replace the above steps 7 through 10 with:

URL: http://www.theologic.com/oflweb. This web site is donated and maintained by TheoLogic Systems, which provides software and information tools for Orthodox Christians and parishes world wide.