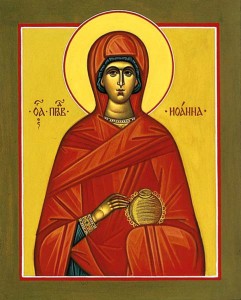 As soon as she touched the body of the Holy Redeemer, she was cut with the sword of an overpowering grief.

At the same time, however . . . amazingly . . . she also felt an immense wave of joy flowing deep within her heart!

Her name was Joanna, and she was the wife of Chuza, the household steward of the tyrant King Herod of Judea (as identified in Chapter Three of the Book of St. Luke).  Yet she was also a deeply committed and faithful follower of the Messiah, Christ Jesus.  And when the news arrived that he had finally died – after three torturous hours on the cross at Mt. Calvary – she hurried off in secret to assist several other loyal women in the anointing of the body with a precious ointment known as  “myrrh.”

At the moment when she first gazed upon the dead body of her Lord and Savior, Joanna knew grief and joy in equal measure.  She was grief-stricken because she knew that the kind and loving figure she had willingly served for so long had departed from this mortal world, and that she would not see him again in his living, earthly form.

Yet she was also bursting with joy at the same moment – because she knew His destiny had been fulfilled, and that He would return some day to comfort the living and raise the dead.

Of course, this was not the first time that St. Joanna had been called upon to assist in the funeral ceremonies of a beloved Christian who had gone to his final reward.  Not many years before, after her husband’s employer, King Herod, had arranged for the beheading of the Great Forerunner, John the Baptist, the patient and longsuffering Joanna had learned a terrible fact: Herod’s vile assassins had dumped the head of the great saint in an ordinary trash pit.

This precious relic was resting in an unclean place, and for the kindhearted and deeply pious Joanna, that sacrilegious outcome was simply not acceptable.

Slipping out under cover of darkness, the valorous Joanna had retrieved this precious Christian relic and had then managed to give it a dignified burial on the Mount of Olives.  Almost three hundred years later, under the rule of the first Christian Roman Emperor, St. Constantine the Great, the saint’s head would be discovered where St. Joanna had left it, and would be transported to Constantinople, where generations of Christians would venerate this beloved relic.

Like several of the other helpful women who followed and ministered to Christ – including Mary Magdalene, the sisters Mary and Martha and Susanna – St. Joanna was a loyal and thoughtful assistant who tried to smooth the path of the Lord at every turn.  It was this same group of dedicated women, according to the Gospeler St. Luke, who would take it upon themselves to prepare Jesus’ body for the tomb.

That was surely a heartbreaking task for these pious devotees – and especially for Joanna, who was required to follow Jesus in secret throughout most of her life, and who was often forced to use her wits in order to avoid being arrested for her faith. Yet she accomplished all of her tasks with courage and dignity.

Joanna’s assignment during the funeral preparation at the Sepulcher must have been especially taxing; it was her job to apply myrrh to the body of the deceased.  Consisting of equal parts of perfume and incense, this extremely valuable ointment (supposedly worth “five times the price of gold” during the time when Jesus walked the earth) was used to mask the smell of death, while also softening and freshening the skin of the deceased.

Described in Luke 8:3 and 24:10, St. Joanna’s ministrations were full of gentle respect and dignity.  Weeping silently, she must have also smiled at times, as she recalled His promise to rise again one day in the fullness of time, and the prediction that the Holy Redeemer would “come again one day to judge the living and the dead, and His Kingdom will have no end.”

Imagine her shock and her wonder then, when upon departing the sepulcher with the other pious women, she began to hear the voices of the Angels announcing joyfully the news of His Resurrection!

It was Mary Magdalene, Joanna, Mary the mother of James, and the other women with them, who told these things to the apostles. (Luke 24:10).

Grief . . . but also great joy!  As St. Luke describes the unfolding astonishment around the empty tomb, we can easily imagine the sublime feelings of joy that must have been surging through the loyal St. Joanna and the other women who attended to the body of Christ during those terrible hours:

Now on the first day of the week, very early in the morning, they, and certain other women with them, came to the tomb bringing the spices which they had prepared.  But they found the stone rolled away from the tomb.  Then they went in and did not find the body of the Lord Jesus. And it happened, as they were greatly perplexed about this, that behold, two men stood by them in shining garments.  Then, as they were afraid and bowed their faces to the earth, they said to them, “Why do you seek the living among the dead?  He is not here, but is risen! Remember how He spoke to you when He was still in Galilee, saying, ‘The Son of Man must be delivered into the hands of sinful men, and be crucified, and the third day rise again.’”

And they remembered His words.  Then they returned from the tomb and told all these things to the eleven and to all the rest.  (Luke 24: 1-9).

The life of St. Joanna the Myrrh-Bearer tells us much about the simple kindness Jesus Christ so often inspired in those who cared about him and cared for him.  Reading the descriptions of how this good woman and her companions went to the tomb to complete the simple task of preparing a body for interment – and were then amazed by the revelation that the Son of God was no longer in the tomb – we can experience again the shock and wonder that the Lord’s Resurrection must have caused throughout all of Palestine!

Apolytikion in the Second Tone

Unto the myrrh-bearing women did the Angel cry out as he stood by the grave:  Myrrh-oils are meet for the dead, but Christ hath proved to be a stranger to corruption.  But cry out:  The Lord is risen, granting great mercy to the world.

When Thou didst cry, Rejoice, unto the Myrrh-bearers, Thou didst make the lamentation of Eve the first mother to cease by Thy Resurrection, O Christ God.  And Thou didst bid Thine Apostles to preach:  The Saviour is risen from the grave.