The Fast of the Apostles: On being sent into the world 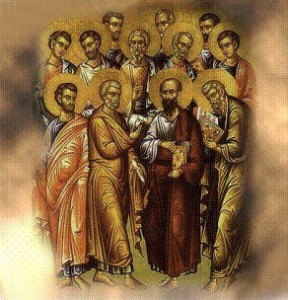 Adapted from an essay by Dr. Alexander Roman

The Apostles’ Fast is one that was actually engaged in by the disciples of Christ following the Descent of the Holy Spirit at Pentecost. Having rejoiced throughout the fifty days following Pascha, the Resurrection of our Lord, God and Saviour, Jesus Christ, the Apostles began to prepare for their departure from Jerusalem to carry Christ’s message to the far corners of the world. As part of their preparation, they began a fast with prayer to ask God to strengthen their resolve and to be with them in their missionary undertakings.

It is this fast that we ourselves participate in when we observe the Apostles’ Fast.  But we do this not only because we honor the Apostles and their sacrifice.  We do this by way of preparing ourselves to be sent as missionaries into our world to reflect and radiate Christ to those around us.

Somewhere along the line, we seem to have disconnected ourselves from the Apostles.  We’ve placed them on a very high plane so that we may admire them and their spirituality while, at the same time, effectively preventing ourselves from ever having anything to do with it as far as our own personal lives are concerned. When Christ asked his sleeping disciples in the Garden of Gethsemane why they could not watch and pray with Him for one hour, He was actually giving all of us some real practical advice on how much time we should be spending in prayer at a minimum.

Yet, today we think that His words were only for His apostles and disciples, for those who made a radical commitment to follow Him until the end of their days.  And we think that this has nothing to do with us! How wrong we are!

The apostles were people like we are.  St Peter was actually so filled with a sense of his own sinfulness that he felt it was inappropriate for him to even speak with Jesus at their first meeting.  And it was he who denied Christ three times.  Later, through the power of the Holy Spirit, it was into this same Peter’s shadow that sick people would try and throw themselves in the hope of receiving healing!

It was St Paul, the Apostle of the Gentiles, who called himself the “least of the disciples.”  He considered himself to be a full member of the Apostolic group, notwithstanding that he did not see Christ before His Crucifixion and Resurrection. St Paul did “see Christ.”  He saw Him in His heavenly glory.  Paul’s apostolic zeal was second to none and he was determined to make the whole world be as he was, that is, see with the eyes of the faith he had.

As the fulfillment of the Law and the Prophets, Christ chose his 12 apostles to represent the New Israel or Church of the New Covenant.  That St Paul would be the 13th apostle hearkens to the role that the two sons of Joseph had among the tribes of Old Israel.

In her liturgy, the Church sometimes numbers the two assistants of Peter and Paul among the ranks of the Apostles, the two Evangelists, Mark and Luke. It was Mark in whose parents’ house the Mystical (Last) Supper was held.  It was Mark who was the mysterious young boy in the Garden at the time of Christ’s arrest who escaped naked from the soldiers. Luke was a Syrian, former pagan doctor, whose great secular education put him right in Paul’s league.  It was appropriate for the Apostle to the Gentiles to have a Gentile assistant! In addition, Christ chose 70 disciples, reflecting the choice of 70 judges by Moses who helped him govern Israel. These 70 disciples went out, two by two, as did the Apostles, and preached, prayed, healed and witnessed.

Added to this Apostolic Choir were the women who assisted Christ throughout his earthly sojourn. St Mary Magdalene was the most famous “Equal to the Apostles.” There is simply no evidence to confirm that she was the “sinful woman” of the New Testament. A sister of Lazarus and Martha of Bethany, Mary Magdalene was a woman of means who used her resources to help the spread of the Christian message.

Throughout the centuries since, others have received the title “Equal to the Apostles,” including Sts. Constantine and Helen, Sts. Cyril and Methodius for their apostolic labors to bring others to Christ. So no one has missed the boat, so to speak, on becoming an Apostle.  We are all called to be such, as a matter of fact.

We may not be called to witness to Christ as the original Apostles did.  We may not be called to die for Christ as they and others did.
But let us remember that the root of the word “martyr” in Greek essentially just means “witness.” For the ancient Greeks, to die for one’s beliefs was considered a “proof” as to their validity, especially as experienced internally by the martyr. The Romans were not, primarily, interested in killing the Apostles and other Christians. What they wanted to do is have them deny their beliefs.  That was where their sense of victory lay. To this end, the refined tortures they used on the Christians were designed to get them to deny Christ and affirm the gods and social structure of the Roman Empire. But Christians would rather suffer and die than deny Christ.

The Apostles did great work to spread the Good News of Jesus Christ and His Church, as did their successors, the Bishops. This is why St Nicholas is commemorated on Thursdays along with the Apostles for he represents the episcopate of all ages. The Apostles’ Fast is therefore something which should be undertaken with an apostolic vision on our part.

When Christ told His disciples to go and preach to all nations, He had us in mind as well. When He set the standards of “feeding the hungry, clothing the naked” and others, He was also using these in a spiritual sense. How many are around us who thirst for spirituality?  How many who hunger for the Word of God?  What about those in the prison of their own sinfulness?  Or who are naked, that is, unclothed by the Grace of the Holy Spirit?

These are all apostolic opportunities that are presented to us by our Lord Himself. As St Peter said, our battle is with principalities and dominions etc. the representatives of the Evil One. And they are something that can only be cast out with prayer and fasting.