Sermon on the Feast of Pentecost 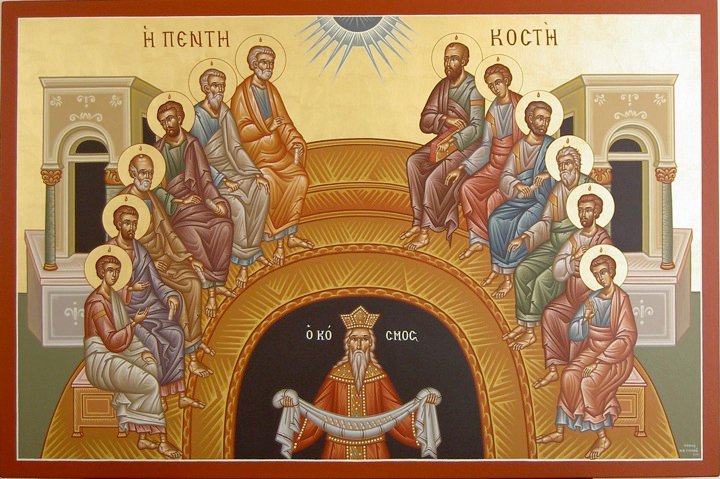 Sermon on the Feast

Our father among the saints John Chrysostom, Archbishop of Constantinople, was a notable Christian bishop and preacher from the fourth and fifth centuries in Syria and Constantinople. He is famous for eloquence in public speaking and his denunciation of abuse of authority in the Church and in the Roman Empire of the time. His banishments demonstrated that secular powers had strong influence in the eastern Church at this period in history.

Let us spiritually extol the grace of the Holy Spirit in spiritual hymns, since spiritual grace has on this day shown upon us from heaven. Though our words are too weak to express adequately the greatness of this grace, we shall praise its power and activity to the extent of our abilities; for the Holy Spirit probes all things, even the depths of divinity.

We are celebrating the day of Pentecost, the day of the Descent of the Holy Spirit to the Apostles, the day of the hope of perfection, the end of expectation, the longing for salvation, the fulfillment of prayer and the image of patience. Today the Spirit Who acted to scatter the nations in the time of Heber has formed tongues of fire among the Apostles. His action of old led to the confusion of the nations, in order to restrain the will of man from its brazenness and consequent chastisement; on this occasion, however, amidst fiery tongues, the deeds wrought by the activity of the Holy Spirit served to preserve us as recipients of preaching, in fulfillment of the will of God.

In the beginning the Spirit of God moved over the water, and later, in the time of Christ, the same Holy Spirit of God rested upon him . Then He moved, and now He rested, as being one in essence, equal in honor, ever-existent and unoriginate together with the Father and the Son.

“Whoever speaks  blasphemy against the Holy Spirit, it shall not be forgiven him, neither in this world, neither in the world to come.”

David, declaring his desire for this Holy Spirit, prayed to God, saying: “Cast me not away from Thy presence, O Lord; and take not Thy Holy Spirit from me.”

As is well known, where He is absent, every sort of corruption sets in. Thus, the Spirit of the Lord departed from Saul, and an evil spirit entered into him, wherefore David said,

“Take not Thy Holy Spirit from me.”

“The hand of the Lord was upon me, and carried me out in the spirit of the Lord.”

This same Holy Spirit chose Jeremiah from his mother’s womb, and raised up Daniel to deliver Susanna. As it is written,

“God raised up by the Holy Spirit a young youth, whose name was Daniel.”

David so loved the presence of this same Holy Spirit that he prayed to God, saving,

“Thy Holy Spirit shall lead me in the land of uprightness.”

This same Holy Spirit of God came to dwell in the holy Virgin Mary, embracing her with the communion of the Divine Word at the good pleasure of the Father, and making her the Theotokos. Elizabeth, being filled with this same Holy Spirit, understood that the Lord had come to her by means of the Virgin; wherefore she said,

“And whence is this to me, that the Mother of my Lord should come to me?”

By the action of the same Holy Spirit, the Lord Himself, when He was giving His Apostles His teaching in detail and strength­ening their minds for the time of His Passion, said to them:

“If I go not away, the Com­forter will not come unto you.”

Moreover, revealing to them the Spirit’s consubstantial power, He said:

“When the Holy Spirit is come, Which proceedeth from the Father, He will guide you into all truth.”

The holy Apostles waited expectantly for the coming of the power of this same Holy Spirit; they waited together to be clothed with power from on high, according to the commandment of the Lord, Who had said:

“Tarry ye in the city of Jerusalem, until ye be endued with power from on high; for, behold, I shall send the promise of My Father upon you.”

And, as it is written,

“when the day of Pentecost was fully come, all the holy Apostles were assembled with one accord in one place, and the Paraclete was sent to them under the appearance of tongues of fire.”

Having received the abundant promise of the Father and the Holy Spirit, they were strengthened, and they manifested Him Who was sent to them, His grace and His power. The martyr and protodeacon Stephen, filled with the same Holy Spirit, Whom he received by the laying-on of hands of the Apostles, did great wonders and miracles among the people. Being full of the Holy Spirit, he saw the doors of heaven opened and the Only-begotten Son and Word of God standing in the flesh at the right hand of the power of God. Filled with this same Holy Spirit, Paul became the preacher of divine mysteries. As Ananias said to him:

“The Lord, even the Savior, hath sent me to thee, that thou mightest receive thy sight, and be filled with the Holy Spirit.”

And Paul afterwards said with assurance:

“And I think also that I have the Spirit of God.”

This is the same Holy Spirit Who preached by the prophets, Who gave understanding to the apostles, Who spoke to men. He was given to them by the Lord, and all their adversaries were not able to gainsay or resist Him. For, as the Lord said,

“It is not ye that speak, but the Spirit of your Father Which speaketh in you.”

This Holy Spirit also or­dains priests, consecrates churches, purifies altars, perfects sacrifices and cleanses people of their sins. This Holy Spirit abides with the godly, refines the righteous and guides kings. This same Holy Spirit preserved the soul of Simeon, lengthening the time of his life and re­versing the rules of death, until the day when he beheld Him Who is the Redeemer of life and death; for it had been promised unto him by the Holy Spirit, that he should not see death before he had seen the Lord’s Christ.

It was the same Holy Spirit Who gave strength to Elijah, and Whose power Elisha desired when he asked of Elijah:

“Let there be, I pray thee, a double portion of thy spirit upon me.”

This Holy Spirit enlightens souls and sanctifies bodies. It was the same Holy Spirit Who descended upon the Apostles and filled them with divine wisdom. Having received His gifts, they were all filled with the knowledge of God; not only were they given divine knowledge, but also spiritual gifts.

Simon Magus, being a stranger to the Holy Spirit, fell to his perdition. As Peter said to Simon:

“Thy money perish with thee, because thou hast desired to purchase the priceless grace of the Holy Spirit with money.”

Therefore, beloved, let us strive to keep our bodies uncorrupted; for one who has acquired a new body, which is a temple of the Holy Spirit, has become a true victor over the devil. What the Spirit of God has said, may it be done unto me.

Moreover, Joseph, strength­ened by this same Holy Spirit, desired not that his body be defiled by the vile deeds of this life; for he knew that the Spirit does not abide in a body that has commerce with sin; there­fore, he attained a royal rank. This Spirit enlightened Bezaleel, so that he fashioned the tabernacle with all beauty and skill. Joshua the son of Nun, possessing the same Spirit, be­came a faithful heir to Moses and obtained the inheritance of the Promised Land for his people. As God said to Moses:

“Take to thyself Joshua the son of Nun, a man who has the Spirit of God in him.”

This is the Spirit of Whom the Lord, when He breathed upon His disciples after His Resurrection from the dead on the third day, said:

And again, it is the same Spirit Who has vouchsafed to give eternal life to the faithful after the general resurrection from the dead. As it is written:

“Thou wilt send forth Thy Spirit, and they shall be created; and Thou shalt renew the face of the earth.”

Many are the gifts of the Holy Spirit; many and all-powerful are His gifts.

As it says in a certain place: By the Word of the Lord were the heavens established, and all the might of them by the Spirit of His mouth. And Isaiah says:

“The Spirit of adoption and of grace.”

He Who is equally ever-existent, and equally unoriginate, and Who shares the throne and the honor of God, His Son and Word, called this Spirit the Spirit Who is our Comforter. David calls Him the Holy Spirit, since the Holy Spirit is sent by holiness; the governing Spirit, since He has dominion over all, be­cause all things came from Him and are kept in existence by Him; and the good Spirit, since salvation and all kinds of goodness are from Him.

“And I will give you a new heart and a new Spirit.”

He is one in essence, one in principle and one in counsel with the Father and the Son. Wouldst thou believe? Listen to what the Scriptures say of Him:

“When He prepared the heaven, I was present with Him.”

“The Lord, and His Spirit hath sent me.”

Lest anyone think, from what was said, that this new Spirit would come from any creatures living or yet to come, or from any other person, He says:

“And I will put My Spirit in you;”

inasmuch as He said,

In the Acts of the holy Apostles, this was ex­pressed in commandments:

“The Holy Spirit said, ‘Separate me Barnabas and Saul for the work whereunto I have called them.’”

“It seemed good to the Holy Spirit, and to us;”

even as it had been said,

“I will put My Spirit in you.”

Would you demonstrate that this was indeed His coming, as was foretold in parables, and that it was His grace acting upon the holy Apostles? Will you believe what was said? Listen to St. John the Evangelist, who says:

“Except a man be born of water and of the Spirit, he cannot enter into the kingdom of God.”

Moreover, the Spirit is called the Comforter, because He is also our advocate with the Father. And not only is He with the Father, but He is always with us also as a gift.

“And I will pray the Father, and He shall give you another Comforter, that He may abide with you forever,”

comforting your hearts and making them steadfast in divine patience and trust in Christ. Whereas the holy Apostles re­ceived this testament after Christ’s holy Rising from the dead, and were sent forth to teach and to baptize in the name of the Father and of the Son and of the Holy Spirit, and whereas we have already been vouchsafed this true washing by the Holy Spirit, let us strive to keep our souls and our bodies undefiled as we glorify the Most holy and consubstantial Trinity, the Father and the Son and the Holy Spirit, now and ever and unto the ages of ages. Amen.