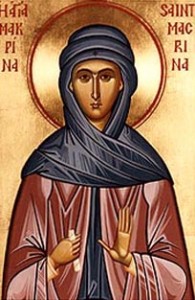 Saint for Our Times

In the Orthodox Church there are countless women saints, who have lived very different kinds of lives and exhibited a wide variety of gifts. One saint in particular demonstrates by her life what a far-reaching influence just one woman can have on the life of the Church—an influence which has spread from her native fourth-century Cappadocia into all the Church throughout the world, down to this present day. This woman is Saint Macrina the Younger.

Macrina came from a devout and faithful family. Her paternal grandmother, Saint Macrina the Elder, along with her husband had suffered the loss of all their considerable property because of their Christian faith. Macrina’s mother, Saint Emmelia, had in her youth wished to remain a virgin, but because she was an orphan renowned for her beauty, she felt it necessary to marry for her own protection from over-zealous suitors. She chose a godly and upright man, Saint Basil the Elder, to be her husband, and together they had ten children, of whom Macrina was the eldest. Basil was a renowned lawyer and was able to restore his family’s fortunes several times over.

Emmelia saw to her daughter’s education with at least as much concern for her soul as for her mind. Deeming the classics of Greek literature inappropriate for a Christian girl to read, she instead gave Macrina the Scriptures, selecting portions appropriate for her age as she matured. Macrina had the Psalter in particular as her constant companion.

From an early age she showed great intelligence and spiritual wisdom, and grew into a young woman of surpassing beauty as well. From among many suitors Macrina’ s father chose to betroth her to one of notable ability and steadfast faith, but the young man died before the marriage could take place. Macrina, however, considered herself bound for life to the young man her father had chosen for her, and declared that she would not marry another. Instead she announced her inten­tion to stay with her mother permanently.

At the same time that the youngest child, Peter, was born, Macrina’s father died. Emmelia was thus left with all the cares of administering a great estate, along with the necessity to rear and educate her nine younger children. Macrina was a great help and encouragement to her mother in all these affairs. She took over the education of her youngest brother com­pletely, feeding him with the Scriptures as she herself had been fed, and he grew up into a young man of great natural abili­ties and great spirituality as well.

The oldest of Macrina’s brothers, Basil, returned from school with an education in rhetoric, great worldly ambi­tions, and quite an inflated opinion of himself. Macrina lost no time in taking him down a peg and turning his ambitions in another direction—toward the ascetic life. Basil excelled as much in this life as he had in the world, and eventually became Bishop of Caesarea. We know him today as Saint Basil the Great.

The second brother and Macrina’s favorite, Naucratius, chose the life of a hermit and devoted himself to serving others, but he died inexplicably at an early age. Macrina controlled her own grief in order to be a support to her mother, who was devastated. The third brother, Gregory, returned from school well-versed in Greek philosophy but weakened in his faith. Through Macrina’s instruction and exhortation, he returned to Christ and fol­lowed his brother Basil into the monastic life. He was later appointed Bishop of Nyssa; we know him as Saint Gregory of Nyssa. It was he who recorded his sister’s life for posterity.

When all the children had been established in the world and the family wealth divided among them (Macrina refused her portion, giving it to the Church), Macrina persuaded her mother to move to the family property in rural Annesi and establish a women’s monastery there. They took the family’s maidservants with them as the first nuns, and Macrina set an example for all by the extreme poverty of her life and the willingness with which she worked with her hands, putting herself on a level with the lowest of her former slaves.

Basil established a men’s monastery across the river, of which the youngest brother, Peter, later became the head. But Macrina was the true spiritual leader of both communities. She established them in prayer, poverty, and good works to the people of the surrounding area. When a famine struck, the two monasteries were miraculously able to provide grain for the whole region until the famine was over.

After the deaths of Emmelia and Basil, Gregory decided to pay a visit to his sister, whom he had not seen in eight years. He arrived at the monastery to find her on her deathbed. She lived for several more days, during which the two of them had a conversation which Gregory recorded in his treatise, On the Soul and Resurrection. In this dialogue he casts himself as the foolish and doubting inquirer, and Macrina as the wise teacher who expounds to him the great truths of eternal life.

Without ever overstepping the nar­row boundaries of acceptable behavior for a woman of her time and station in life, Macrina set an example of piety, zeal, and holy living that—directly and indirectly—influenced the entire Church. She constantly and fearlessly called others toward a higher life, and her voice comes down through the centuries to reach even our dulled and unresponsive ears. It is to the righteous memory of Holy Macrina, and to all the godly women of the Orthodox Church throughout the ages, that this issue of AGAIN is dedicated. Setting their lives before us, may we strive always toward that higher life for which they struggled, and call those near to us to follow also. Like a pebble dropped into a pond, may we, too, create ripples that will reach far beyond our dreams.